About history & culture
The port of Shimoda is naturally formed. Ships traveling between Edo (the former name of Tokyo) and Osaka used to stop at the port of Shimoda to avoid storms back in the Edo period (the 17th to mid-19th century). A guard office was also installed at here as a checkpoint for sea travel.
Black ships led by Commodore Perry from the United States arrived at the port of Shimoda at the end of the Edo period (mid-19th century). This port then became the first in Japan to be opened to U.S. ships. Historic landmarks and cultural features from this period still remain. 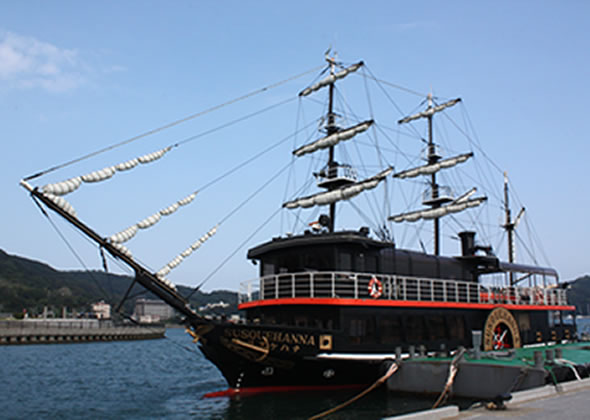 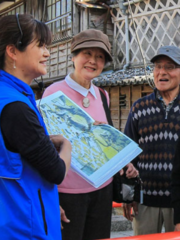 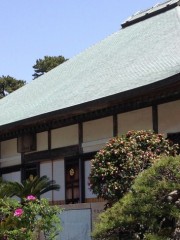 'The Stars and Stripes Flaps.' Please visit the history of opening the country of Japan at Gyokusenji Temple, the first US Consulate General in Japan (30 minutes-)
※ Group guide is available by reservation.
Harris Memorial Hall is an exhibition of a turbulent era of Japan, which tells you about the arrival of Black Ships, the opening of the Consulate General and the conclusion of the US Japan Treaty of Amity and Commerce. Please take a look at Harris's favorite belongings and related materials,
which shows tough negotiations with the Shogunate. By looking at the ground of the temple where the Stars and Stripes was hoisted for the first time in Japan, and Harris's office in the main hall, you will feel Harris's breathing that overcame hardship and fulfilled the mission.

Story of Opening the Port of Shimoda, with tea and sweets (Ryosenji Temple)

Ryosenji Temple (where Shimoda Treaty was signed). 3,000 visual materials are devoted to the history of Opening of Japan and cross-cultural exchange. While watching referencial materials, the chief priest tells you, 'Foreign countries from Japanese and Japan from foreigners,' totally different from common talks on history. You'll meet something totally new. It is amusing ! The common sense that the story of the priest is difficult and boring can be upset. ※ This program is generally for group and company guests, with 10 persons or up. 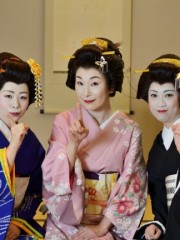 Have the opportunity to call geishas at restaurants in Shimoda. They will perform dances and play music, as well as assist you in the banquet. The authentic geisha in Shimoda has 400 years history, which brings you back to the Edo era and the Perry Black Ship visit to the harbor of Shimoda. Feel free to let them join you even in lunch time. 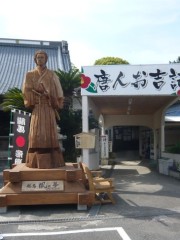 Historical tour with talk entitled 'Okichi and Ryoma' at the temple. Tojin Okichi, quietly bloomed
in the shadow of the opening of the country, died a lonely death. Hofukuji Temple is well known
as her burial place.
In addition, it's from here Ryoma Sakamoto, an ardent patriot, ran through the turbulent era.
He was overlooked his crime of running away from his feudal domain.
Please visit the grave of Okichi and listen to the historical talks, while looking at the related items of
the two unique figures in the Memorial Hall. 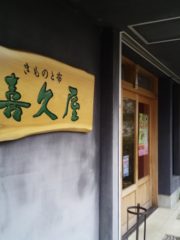 Put on a kimono or yukata(light kimono for warm seasons) and stroll the streets in the historical
town of Shimoda. Kimono (yukata) and all traditional attachments are to rent. (included in the price)
Kikuya owner or a female staff will make perfect arrangement of yukata for you.
No preparation is necessary on your part. We will keep your belongings, while you are in the town
with kimono(yukata). Reservation necessary, before a week.

Chorakuji Temple where the Russo-Japan Treaty of Amity was signed. 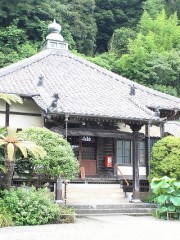 Talk about the background of the conclusion of the Russo-Japan Treaty of Amity. Details of what happened in the main hall when Admiral Putyatin arrived and the Treaty was signed.
Listen to the sound of Suikinkutsu, echo of dropping water in the vase buried in the soil, near the statue of young Kobo Daishi master, in the precincts.
The temple is also assigned as 88 hallow grounds in Izu, 33 Deity of Mercy hallow grounds in Izu Yokomichi and as seven gods of good fortune in Izu. 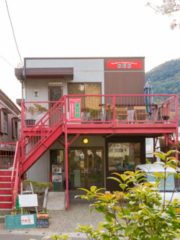 Period
Throughout a year
Irregular days off. No tours during the summer.

We will take you out for a stroll about the city of Shimoda, showing you the history and the natural beauty.
During the tour, you can experience what you cannot on usual occasions, at Japanese style houses and shops.
We will take you to Instagram points and make suggestions about sightseeing and good eating places.
A light meal provided. 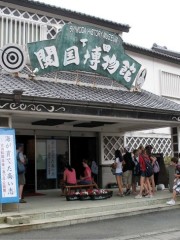 Shimoda Port was opened to the outside world by the arrival of the American fleet,'Kurofune - Black Ships.'
As a history museum in Shimoda, we display 1,000 historical materials related to Perry, Harris, Putjatin, Shoin Yoshida and Tojin Okich. 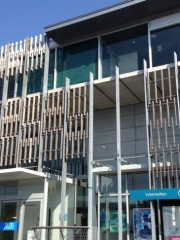 A visit to Harbor Museum and JGFA Marlin Museum. Shimoda has been keeping the torch of civilization.  The city flourished as an important point of the sea route that connected Edo(Tokyo) and Kamigata(Kyoto-Osaka area), and accepted the visit of Black Ships, which put an end to the national isolation of Japan.  In harbor Museum, you will feel the current of the history of Shimoda.
In addition, off Shimoda once was a base for harpoon marlin fishing, and International Billfish Tournament is now held in July every year. More than 100 cruisers assemble from all over Japan to take part in the tournament. In JGFA Museum, replicas of marlins are displayed and the seat for angler, who fights with marlin is reproduced.  Imagine the great ocean and immerse yourself in the feeling of being there.

Uehara Museum of Art, from Impressionist to Buddha statue, etc. 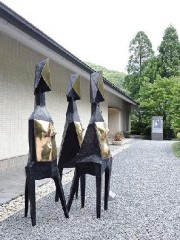 Uehara Buddhist Art Museum and the Uehara Museum of Modern Art were unified and renewed as Uehara Museum of Art (Buddhist Hall/ Modern Hall) on November 3rd, 2017.  We will exhibit a wide range of collections from the Buddhist images of the Heian and Kamakura period, old transcription in Nara era to the Impressionists, Matisse, Picasso and Japanese modern paintings.  Please relax yourself in this new museum where the beauty of Buddhist arts and modern paintings meet.

We can answer your inquiries and provide extra information.

Feel free to contact us to learn more about Shimoda.

The information on this website is subject to change. Please contact individual offices, stores, or the Seamon Shimoda Guide office (TEL: 0558-22-5255) for more detail.